The World through different eyes

A personal view of how KeraSoft IC was a life changer 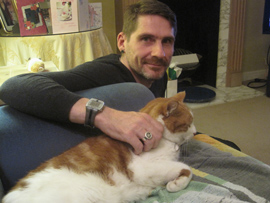 Diagnosed with keratoconus at the age of 12, Kevin MacNeil has lived the last 28 years with limited vision. His life has now changed thanks to KeraSoft IC.

“It’s like living in a slightly different world. I now see everything in a better light.”

Kevin MacNeil underwent a corneal graft aged 13, soon after diagnosis and for almost three decades has worn spectacles to help correct his sight.

Over time, the vision in Kevin’s left eye began to deteriorate and the only option offered to him was a second graft.

“The possibility that I could have anything other than a graft in my left eye was never mentioned to me,” he explains.

And, having visited several opticians every six to 12 months since his diagnosis, he adds:


“No optometrist ever spoke to me about KeraSoft and I think that’s a great shame; I could have benefited from this years ago. Right now, I’m wearing my KeraSoft lenses and my vision has never been better; it’s much better than when I wore glasses.”

Kevin recalls the day his vision diminished: “I remember my eye sight slowly getting worse and I was moving closer and closer to the blackboard in class. It wasn’t a dramatic change though, so it wasn’t something I took much notice of.”

“Then one day I went to school and all my friends were looking at me because my right eye had become cloudy and misshapen. The cloudiness was very apparent and my teacher took one look at it and knew something was wrong.”

The first port of call for a young Mr MacNeil was the eye specialist, who diagnosed him with keratoconus. The cloudiness was due to hydrops, which occurs when the back surface of the cornea ruptures and absorbs fluid from inside the eye.

However, growing up on the somewhat isolated Isle of Lewis where an eye specialist only visited once a month meant that as a child he would spend long periods of time away from home and school.

Speaking about this uncertain time, Kevin says: “The diagnosis of keratoconus had a large psychological effect on me. I was an outgoing kid who suddenly became very introverted, withdrawn and insecure, lacking in confidence.”

Speaking candidly about how the condition, and a lack of solution, changed his life, Kevin explains: “It impinges on your perception and in turn your personality. I would have been a very different person if this hadn’t of happened.”

In August this year, Kevin became aware of KeraSoft IC by chance. “I was on the Internet and happened to come across information about KeraSoft on the Twitter feed of a keratoconus group,” he recalls. Seeking the opinion of his health journalist wife, the duo contacted UltraVision directly to see if they could help.

The wheels moved quickly in motion from that first email to optometrist and UltraVision Clincial Director, Lynn White. Just three consultations and less than two months later, Kevin was given his new lenses.


A lens makes all the difference

Describing the moment she first met Kevin, Mrs White recalls: “He was all hunched up, he had his head down and was very withdrawn. The lenses turned him into a different person; the second time we met, I couldn’t stop him talking.”

Kevin says: “It took me a few days to get used to wearing contacts again as I hadn’t worn them in so long, but since then I could not be more pleased with the result. The lenses give me an extra confidence boost in the outside world.”

“Before I would have to frown and squint at things when I was reading, but now I can see things with clarity and ease, even from a distance. I also see so much more detail than I did before.”